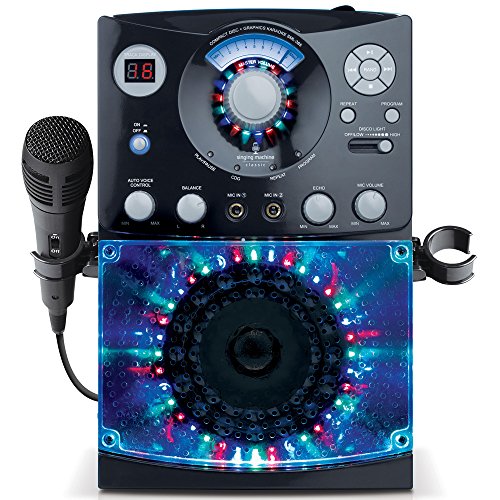 Party-time is a blast with this flashing Disco Light CDG Karaoke System. This top-loading player makes changing CD’s a breeze. Two microphone jacks with separate volume controls lets you and a friend sing duets. Add in the balance and echo control and you will be rocking the house until daybreak!Pump up your karaoke party with flashing disco light effects from this Singing Machine karaoke system (model SML-385), which can play the lyrics for you on your TV and has two microphone inputs that’s great for duets. This top-loading machine lets you easily swap CDs and it features a 2-digit LED CDG track indicator, audio auxiliary input and output, balance and echo control, auto voice control, and AC power operation. It comes with a free CDG music sampler and one microphone to get you started.

CDG: An acronym for Compact Disc plus Graphics, this is a regular CD with information stored on a data track simultaneous to music. In laymen’s terms, CDG has a video output for simple graphics (not full motion video). In the case of karaoke, the graphics function is used to store song lyrics, and display the lyrics in synch with the music. In most cases, CDG software displays lyrics, which change color as they are to be sung. A regular television is all that is required to display CDG lyrics.

Echo: Produced by creating minor controlled feedback in the singer’s voice, echo adds depth and resonance. The echo function does not affect the music.

Auto Voice Control (AVC): This useful function is used primarily during practice sessions while a singer is learning a song. Please note that the AVC function only works with multiplex recordings and not with standard audio recordings.

Multiplex: A Multiplex allows you to separate the vocals and music by using the balance control on your Singing Machine Karaoke System.