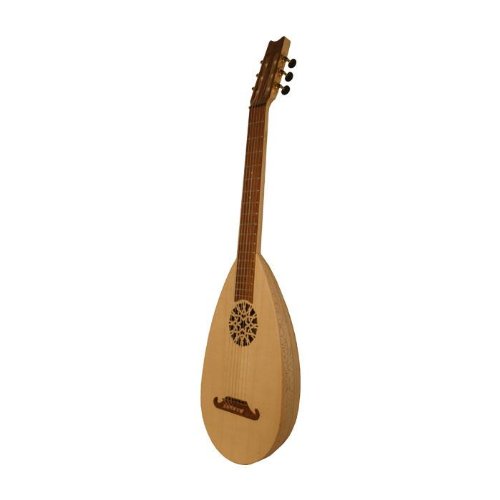 The lute-guitar is an attractive instrument of a similar size to the guitar but with a body like a lute. With a neck shaped like that of a guitar and a 51mm (2 inch) nut of ebony, it will appeal to those who are familiar with normal classical or acoustic guitars. It is tuned like a guitar with six strings, three of plain nylon and three of nylon wound in nickel. If it is to be used for lute music, the 3rd string may be tuned a semi-tone down to F# to enable the application of lute fingering. Spruce is used for the unpolished soundboard in keeping with original lutes and its soundhole has a carved rose in an attractive geometric pattern. In keeping with the lute, the characteristically bowl-shaped body is achieved by edge-gluing together slats of thin wood bent to a specific shape with no internal structure to retain its form. The overall length is 953 mm (37.5 inches) and the scale length is 648 mm (25.5 Inches), similar to a normal guitar. A hard case is included with this instrument. The lute has a long history dating back to pre-biblical times and although it has existed in many forms it may be classified as either short- or long-necked. The European lute and its ancestor, the oud, (or, ‘al’ud’ meaning ‘the wood’) are examples of the short-necked variety and were later developments. Examples of the lute-guitar, or some may call it guitar-lute, were plentiful in Germany towards the end of the 19th century and whilst it may be thought of as a type of guitar due to its stringing, six-course versions of the lute were also known in the Renaissance period. The term ‘course’ refers to the arrangement of the stringing. A ‘course’ may contain single, double or even triple strings, thus the guitar has single-string courses whereas the lute would be double strung. As with the German examples the lute-guitar has a bridge reminiscent of Baroque guitars with upturned ‘moustaches’ at the ends and pegs to retain the strings