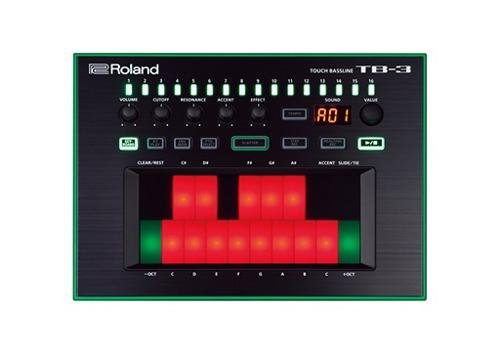 Sound Modules & Samplers – To say that Roland’s original 1982 TB-303 Transistor Bassline synthesizer was one of the most influential innovations in the world of early electronic music would be an almost laughable understatement. A definitive element in the sound of Acid House and an essential part of early trance music, this small silver box quickly became a staple synth around the world. The AIRA TB-3 Bassline synth gives you a chance to experience this iconic sound in a whole new way. Not only does the AIRA TB-3 faithfully reproduce the full range of the TB-303 sound, but it’s also super-easy to program, play, and integrate into the rest of your music-production rig. At Sweetwater, we’re extremely excited about this new bass synthesizer model. Keep reading to find out why.Roland AIRA TB-3 Touch Bassline Synthesizer at a Glance:The sound of the original TB-303 and SO MUCH MORE!It may look like a module but it plays like a synthSimple step sequencing for awesome groove creationAdd the perfect dose of random to your grooveOld-school simplicity meets modern integrationThe sound of the original TB-303 and SO MUCH MORE!Thanks to Roland’s impressive new Analog Circuit Behavior technology, the TB-3 is capable of reproducing the full range of sounds and textures available on the original TB-303… and a whole lot more! This component-to-component modeling approach gives you the genuine behavior of the TB-303 attack, slide, and tie behavior, in addition to a flawlessly reproduced -18dB/octave ladder filter. But that’s only the tip of the iceberg. With a total of four oscillators and a rack of effects onboard, the TB-3 offers up an amazing palette of tones. In all, you get 134 unique sounds broken up into four banks, including original TB-303 sounds, aggressive bass sounds, aggressive lead sounds, and sound effects. And we’re just getting started!It may look like a module but it plays like a synthA major improvement that the AIRA TB-3 offers over the original TB-303 is its s