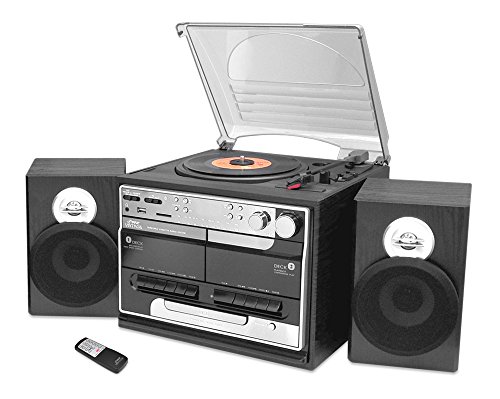 The PTTCSM70BT Bluetooth turntable and Speaker System combines classic turntable style with modern technology. It can play it all. wirelessly stream music from your device via Bluetooth, insert a USB flash drive or SD memory card loaded with MP3 digital music files, find your favorite AM/FM radio station, connect an external device like a CD or MP3 player via the aux input along with your favorite vinyl records. This turntable will also provide you with the ability to turn your vinyl records into MP3 digital music files. Turn that bulky stack of records into a compact digital music library. The two external stereo speakers will fill any room in the house with crisp stereo sounds while the vintage design will make this turntable the centerpiece to any room. Add the classic look and feel with the PTTCSM70BT Bluetooth turntable and Speaker System.