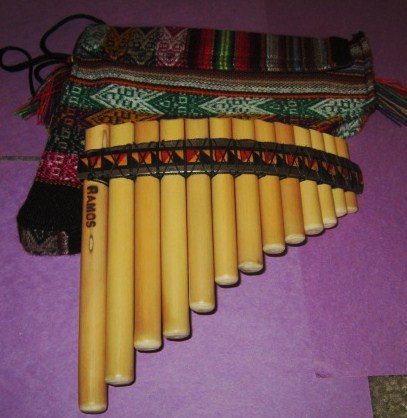 Made from the renewable crop of bamboo. These are the core instruments played in the Andes for hundreds of years
The pan flute or pan pipe (also known as panflute or panpipes) is an ancient Some professional instruments use wax or pellets to tune the fundamental

The pan flute, also referred to as the syrinx, is an ancient musical instrument that consists of 10 or more pipes in increasing lengths bound together as one wind instrument. It is played vertically but blown horizontally across the open inner edges of the pipes. The air blown through the instrument creates a series of pulses that generate sound waves within the tubes. Each pipe is tuned to a different note for producing a wide range of sound.

The most beloved musical instrument of most of the cultures that developed in South America, especially in the regions that today include the territories of Peru, Ecuador, the department in the south of Colombia, Bolivia and part of Chile, is called panflute, Siringa or Zamponia. There are a dozen names of European origin tagged to the instrument and to its variants. In Peru it is commonly referred to as the Antara or Zamponia and there are surely other names that can be added because it is a common instrument in the diverse indigenous tribes of the Amazon forest.

Pan pipes are perhaps the universal instrument par excellence stemming from remote times that developed in all cultures in the four corners of the Earth. It is curious that this instrument has occurred in similar shapes and forms everywhere during different periods.
Measurements:
6 inches long pipe
1 1/2 inches short pipe
Tuned in Mi menor
Case included
Beautiful instrument