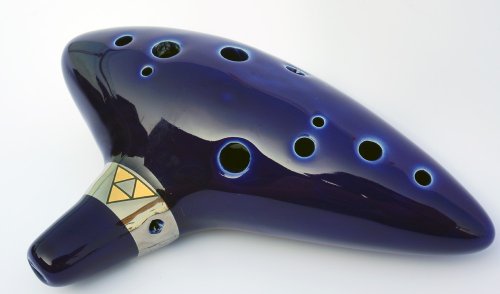 The zelda ocarina is made of the highest standard of kiln-fired ceramic which is smooth and bright on the surface. It is not a toy or a collector’s products, it is a hand-crafted and tuned musical flute instrument for zelda fans!
This 12 hole Zelda Ocarina, key of A4-F6, is tuned in the key of C, and can go below C down to the A. This zelda ocarina has exquisite breath response and crystal clear tone.The ocarina is made of kiln-fired ceramic,which is a very special craft in burning the ocarina.Every ocarina we provide a tested before it sell out.

It comes with a sheet of scale chart and a finger chart as well as a strap, so you can wear this ocarina on your neck wherever you go. The protective bag is high quality and soft inner side to protect the ocarina be broken.