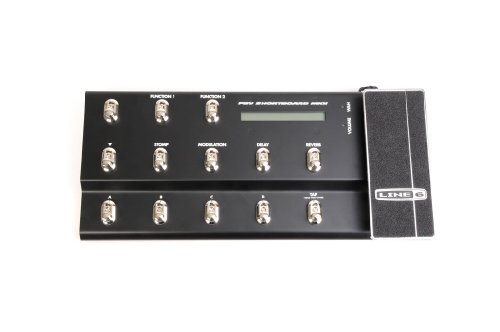 Get the most from your Line 6 amp and POD with FBV Shortboard MkII foot controller! FBV Shortboard MkII isn’t your average foot controller. It’s a full-on remote control that keeps you at the foot of the stage instead of tied to the front of your Line 6 amp or POD. It offers all the classic advantages you expect from a Line 6 foot controller, including rock-solid channel switches, a rugged wah/volume pedal and an oversized backlit display, but it’s also full of surprises. The steel footswitches give you total control over your tone. Dedicated footswitches let you change, scroll and select presets with uncompromised speed, add or remove effects in an instant, synchronize all your time-based effects with Tap Tempo, and more! Load up to 64 presets in the 4 banks. Adding individual or simultaneous effects on top of each preset allows for on-the-fly colorization and customization of your tones. An added bonus: the well-spaced footswitches are conveniently laid out so that you’re not stepping on two at once (unless you want to)! The burly, full-sized pedal feels solid under your foot and features plenty of grip. Click the toe to volley back and forth between volume and wah-wah control. (Adding an expression pedal provides dedicated volume control.) Oversized and backlit, the LCD is big, bright and easy to read. It shows you everything you need to know including preset name chromatic tuner display. FBV Shortboard MkII connects to your Line 6 amp or POD via the included locking RJ-45 cable. FBV Shortboard MkII also features a USB jack that can be used for upgrading the firmware of Spider IV and Spider Valve MkII amplifiers. Perfectly paired with Spider IV and Spider Valve MkII amplifiers, FBV Shortboard MkII provides complete, hands-free control of the looper, pitch-shifter and other on-board effects. FBV Shortboard MkII is compatible with most Line 6 amplifiers and POD processors.