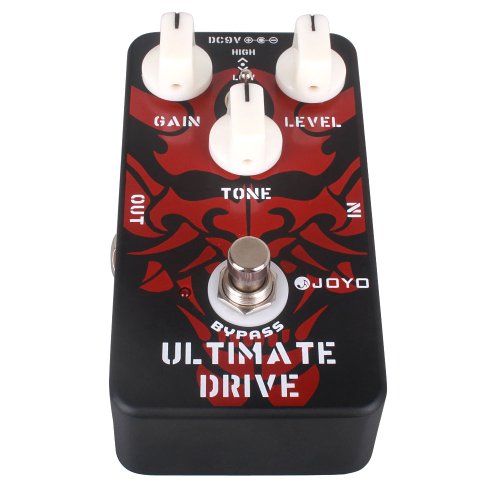 From AC/DC to Guns ‘N Roses, the Offspring to Pink Floyd, the JF-02 Ultimate Drive pedal from JOYO nails the timeless tones of the Classic Rock era. The “OCD pedal,” as it has become known, has two settings – High and Low – which allow for flexibility. The tone it creates is soothing and sweet when just a little bit of gain is dialed in.

And then you start to lay into the pedal (either with another pedal up front or by turning up the drive and volume) and the Ultimate Drive really begins to shine! Arena rockers beware… you won’t want to let anyone borrow this little monster.

Designed with the goal of recreating the tone of a tube amplifier at volume, the OCD’s distortion is somewhat of a hybrid when it comes to Solid State or Vacuum Tube tone. The real deal when it comes to aesthetics, sound and construction – Joyo’s Ultimate Drive pedal features a metal shell-casing, quality connectors and sturdy controls, with bright-red plastic knobs!

The JF-02 has been wired for true-bypass, has an LED on/off indicator light, and the second Hi/Low tone switch, besides the normal ON/OFF Stomp-box clicker-switch, is durable and functional. This pedal will provide years of service and will turn heads as the cutting midrange pierces through the crowd.

Joyo’s OCD or Ultimate Drive Distortion/Overdrive pedal comes with a 9V battery, so its ready for action right out of the box. Better still, it’s available at an incredible price!