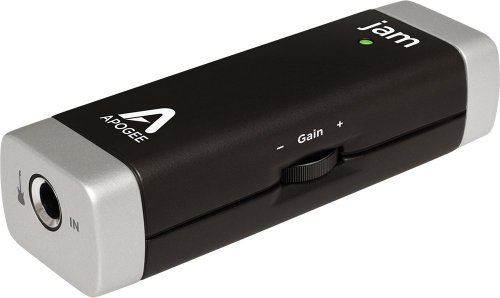 JAM brings the legendary sound quality of Apogee to iPad, iPhone and Mac for just . Now guitarists can have a pocket-sized, plug in and play interface at an unprecedented price and experience ultimate tone with the guitar amps and effects in Apple’s GarageBand software or other compatible applications. JAM is a premium digital converter and instrument preamp featuring Apogee’s PureDIGITAL technology. PureDIGITAL means no noise just great guitar tone. You will notice the sonic difference between JAM and other similar products immediately. It’s easy to tell if JAM is connected properly by the status LED on the top panel. If it’s green, you are ready to rock and the light becomes your input level indicator. If it turns red, you are rocking too hard and you need to turn your gain down with the control knob. JAM features an input gain control knob. This rotary style wheel is conveniently located on the side of JAM for easy thumb access and allows you to dial in the level of your guitar without accessing software. There’s no difficult set up or configuration with JAM. Just plug in, open your favorite software and rock out.