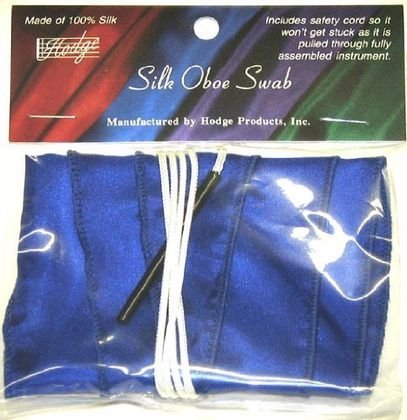 Hodge Silk Swabs are premium swabs made from 100% silk for removing moisture from woodwind instruments after each use. Hodge uses silk because it is absorbent, lint free and compressible. The swabs are large enough to wick the moisture out of the larger part of the bore, but compressible enough to pull through the neck. They pull through the fully assembled instrument. They do not leave lint in the keys. They are not stored inside the instrument so the moisture does not remain. Hodge swabs are regularly recommended by repairmen for optimum care of your instrument. The oboe swabs clean the entire instrument fully assembled. They have a safety cord on the back end, so that if there were a knot in one and it got stuck, it could be pulled back out the way it went in. The oboe swabs use a plastic coated straight weight.