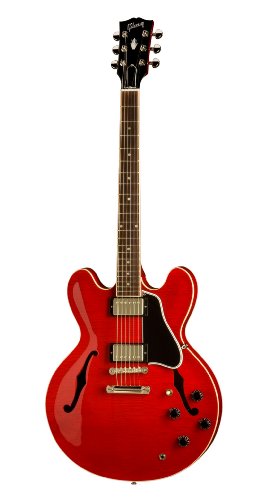 With the exception of the Les Paul Standard, there are few other guitars in the Gibson catalog that can match the ES-335 for sheer star power. It’s been seen in the hands of guitarists as diverse as Eric Clapton, Keith Richards, B. B. King and session legend, Larry Carlton (who has his own 335 Signature model). And of all the ES-335s Gibson has made, the one with the most magic is the 1960 Dot-Neck. With its arched top, f-holes and solid maple center block, the semi-hollow 335 has all the raw power of a solid body, but with the refined elegance of a old school Gibson archtop. The ES-335 is the perfect guitar for practically any musical setting. It’s as perfect a fit for jazz and fusion as it is for blues, hard rock and beyond. Later models had block inlays, but the dot-neck will forever hold a special place in the hearts of most guitar players.History speaks for itself. The ES-335 is one of the most important guitars of all time. Right from its introduction in 1958 as the world’s first semi-hollowbody electric guitar it has been a mainstay of players eager to balance the gorgeous, round, mellow tones perfect for jazz and blues with the edge and sustain of a full-blooded solidbody.

Today the Gibson Custom Shop creates exacting duplicates of the ES-335 as it first left the Kalamazoo plant in 1958. That year just 267 were built, but the original vintage 335s grew steadily in popularity, peaking in 1967 thanks largely to Eric Clapton’s high-profile use of a cherry ES-335 in the band Cream.

Body and Finishes
The Custom Shop ES-335 is available with many finish options, reflecting the color choices that have evolved over the model’s 50-year history. In Satin finish, trans black and cherry colors are available, with a plain maple top, back, and rims. Ebony is available only in plain maple. With the figured maple top, back, and rims option, cherry, tri-burst, antique natural, light burst, and vintage sunburst colors are available. Wine red, trans brown, Beale Street Blue, and cinnamon burst finishes are also available in limited quantities, along with gold hardware, for figured and for plain maple models.

Regardless of color, the ES-335 retains its classic proportions: 16 1/2-inches wide, 20-inches long, and 1 3/4-inches deep. The neck is one-piece mahogany beneath a 22-fret rosewood fingerboard with pearloid inlays and a single-ply binding. Additionally, there’s single-ply binding on the top and back.

Famous Players
Spanning numerous decades, the ES-335 has been in the hands of countless musicians. From Chuck Berry’s numerous performances to Alvin Lee’s incendiary performance at Woodstock to Police’s 2008 tour in NYC, the ES-335 has been the instrument of choice for any players seeking gorgeous, round, mellow tones, tempered with the edge and sustain of a full-blooded solidbody electric like the Les Paul.

Nitrocellulose Finish
Applying a nitrocellulose finish to any Gibson guitar is one of the most labor-intensive elements of the guitar-making process. A properly applied nitro finish requires extensive man hours, several evenly applied coats, and an exorbitant amount of drying time. But this fact has never swayed Gibson into changing this time-tested method, employed ever since the first Gibson guitar was swathed with lacquer back in 1894. Why? For starters, a nitro finish dries to a much thinner coat than a polyurethane finish, which means there is less interference with the natural vibration of the instrument, allowing for a purer tone. A nitro finish is also a softer finish, which makes it easily repairable. You can touch up a scratch or ding on a nitro finish, but you can’t do the same on a poly finish. In addition, a nitro finish is very porous in nature, and actually gets thinner over time. It does not “seal” wood in an airtight shell–as a poly finish does–and allows the wood to breathe and age properly.

All VOS (Vintage Original Spec) series guitars will use a proprietary process that includes unique steps for staining, wet-sanding, and hand-rubbing; subsequently the guitars reflect what a well-cared for 40-year-old guitar looks like. The result is a remarkable patina that will delight even the most discriminating enthusiast.