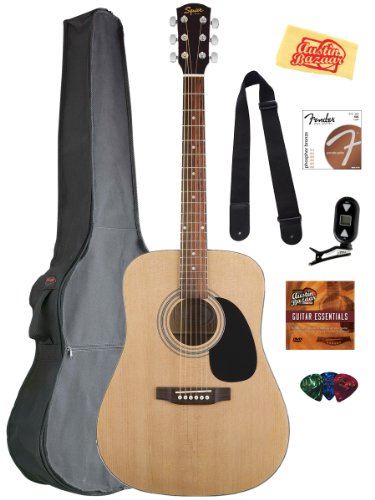 Bundle includes Fender Acoustic Guitar, Gig Bag, Austin Bazaar Instructional DVD, Strap, Picks, Strings, Tuner, and Austin Bazaar Polishing Cloth. The Fender Squier Acoustic Guitar offers warm, vibrant, acoustic Fender sound in your hands at a great price, with a choice of convenient and practical features that will have the beginning guitarist in your house strumming away in no time. This bundle is designed to include everything the beginning guitarist needs to get started on the right track. Whether its to get the ladies or hang out and learn some of your favorite tunes, this pack is perfect for children and teens, as well as adults who are looking for a quality, inexpensive way to try their hand at a new hobby.