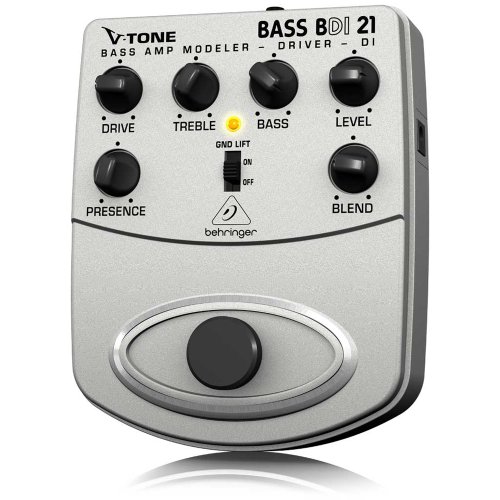 There are DI boxes…and then there’s the V-TONE BASS BDI21 – the feature-packed analog DI box built especially for bass.

Not Your Average DI Box

The BDI21 combines the features of an active DI (direct injection) box with our proprietary tube emulation circuitry. It’s like having a truckload of vintage tube amps right at your toes! The Blend control allows you to mix the amount of tube emulation you want with your direct bass signal. And if you don’t want to use the tube emulation feature, just step on the switch and the ADI21 functions as a superb active DI box.

So Easy to Use

With its dedicated DRIVE, TREBLE, BASS, LEVEL, and PRESENCE dials, the BDI21 DI box goes above and beyond, giving you vintage tube tones for some funked-up slap, gonzo overdrive and everything in-between. You can use the BDI21 as a recording output DI, with tube emulation, or as a standard active DI box, when running in bypass mode. The output is laid out on 1/4″ TS or balanced, gold-plated XLR connectors. There’s also a ground lift switch that eliminates typical ground loop hum problems. You can power this bad boy with a 9V battery or our PSU-SB DC power supply (not included).

When it comes to DI boxes, you can go with simple injection, or plug into the BDI21 to add some badass tube-like fuel injection to your bass. Try the V-TONE BASS BDI21 at your local BEHRINGER dealer and find out just how great your bass can sound.