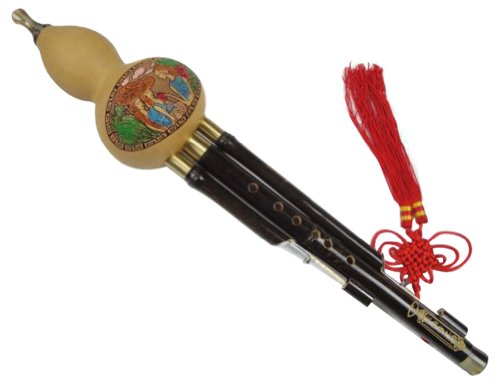 The hulusi or cucurbit flute is a free reed wind instrument from China. It is held vertically and has three pipes which pass through a gourd wind chest.

The hulusi was originated by ethnic Dai Tribe of Southwest China, which can be dated back to Qin and Han Dynasties (221 BC to 220 AD). The sound of the original Yunnan Dai Tribe hulusi is hauntingly beautiful, fairly soft, and has a very pure, clarinet-like sound. The Dai Tribe men would play it to express their love to women, while other ethnic minorities often played the hulusi in the fields when taking a break from planting or harvesting.

Although the hulusi is still predominantly performed in China, it has in recent years been adopted by European composers and performers. Rohan Leach from England, Rapheal De Cock from Belgium and Herman Witkam from the Netherlands have all taken the instrument in new directions.

Other Keys Available Upon Request: D Minor, F Minor, Bb, A, G, F, D Major, Eb, Bb Major, and C Major. Additional fee of $ 15and 10 – 15 days for custom tuning
Personalize Your Hulusi: engrave a Dragon or a Name by our experienced crafter – optional for $ 15

~ Browse Interact China for over 30 models in Hulsui, Bawu and Uyghur musical instruments ~

*** THIS IS AN ORIGINAL YUNNAN HULUSI TONED AND CARVED BY GENUINE HULUSI MASTER, NOT A FACTORY REPRODUCTION ***