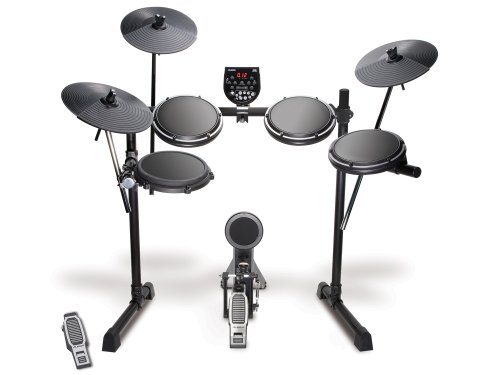 The Alesis DM6 Kit highlights the best of Alesis’ 20 years of experience in professional electronic percussion gear. This electronic drum set features a completely new sound module with 108 quality drum, cymbal, and percussion sounds. Its pads feel great and its hardware and rack system are high quality. UNMISTAKABLE ALESIS FEEL Like all Alesis drum sets, the DM6 Kit features realistic, natural-feeling playing surfaces. To reduce vibration feedback, we selected natural rubber drum and cymbal surfaces for the DM6 Kit’s pads. This five-piece kit gets you started on a dual-zone snare pad for two-sound compatibility. The DM6 Kit also comes with three tom pads, an upright kick drum pad, hi-hat, crash, and ride cymbal pads. It even comes with an Alesis bass drum pedal and the kick pad is compatible with any single or double bass drum pedal for your personal feel. OUTSTANDING SOUND The brand-new DM6 module features an internal collection of top-notch drum, cymbal, and percussion sounds that will blow you away. You can edit and save your drum kits for custom sounds. You get 10 presets and 5 custom slots. In addition to the sounds in the DM6 module, there’s a USB output that sends the notes you play out as MIDI signal, so you can use the DM6 as a trigger-to-MIDI interface with drum-module software such as BFD, Toontrack, or Reason for a limitless collection of sounds. The DM6 has headphone and amplifier outputs so you can play quietly in phones or connect up and rock out. You can also connect your iPod or CD player and mix it in with the DM6’s stereo input jack. RUGGED HARDWARE A drumset is only as strong as its weakest link. The DM6 Kit mounts on a heavy-duty aluminum rack. The standard 1 1/2″ tubing enables you to add on with Alesis and other brands’ clamps and mounts. The kit also comes with a full set of mounting hardware and cables, as well as rugged kick drum and hi-hat pedals.An excellent choice in electronic drum sets for price-conscious drummers and aspiring players, this Alesis DM6 Kit combines the compact DM6 drum-sound module with an electronic drum set with extremely realistic playing surfaces and rugged rack system. The DM6 drum module features a completely new sound-set with 108 quality drum, cymbal, and percussion instruments as well as a sequencer with play-along tracks, metronome, recorder, mix-in jack for playing along with your iPod, and more.