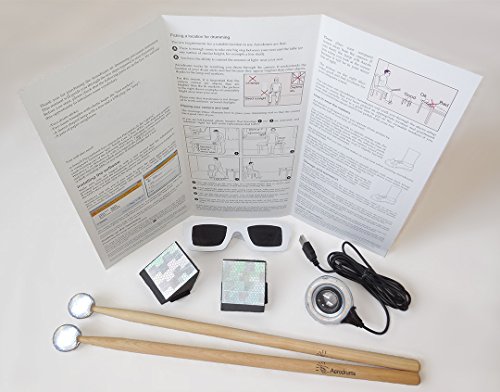 Aerodrums is a new kind of percussion instrument.
It enables you to drum without a physical drum kit, by making air-drumming gestures.

PLEASE NOTE: Aerodrums requires a Windows Vista, 7 or 8 computer with at least an Intel Core 2 Duo 2GHz processor, or an Apple computer from 2009 or later running Mac OS X 10.6 up; and a Sony Playstation 3 Eye camera (available from this website). The software is available via download on the Aerodrums site. Aerodrums cannot be used to drum outdoors in daylight.

Very portable: fits in your backpack with a laptop.

Silent to others when used with headphones.

Musical expressiveness on par with a real drum kit or electronic drums.

Flexible and extensible: create and configure your own drum kits, use your own sound samples. Trigger your drum sampler or Digital audio workstation via MIDI.